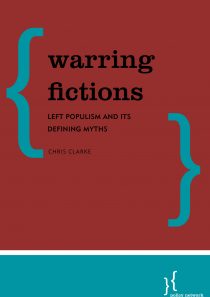 Left populism and its defining myths

Warring Fictions is a critique of Corbynism and left populism more broadly, using the root causes of Labour divisions since 2015 as a case study. The book is authored by Chris Clarke – a specialist in engagement and social cohesion, and a former press officer for several Labour candidates.

The central Warring Fictions argument is that conventional ways of understanding Labour’s civil war focus on the wrong issue. The conflict doesn’t really run along a political spectrum – between ‘left-wingers’ and ‘centrists’, between ‘radicals’ and ‘moderates’, or through degrees of egalitarianism.

Instead, it is a clash between two world views: characterised by the author as ‘left populism’ and ‘left pluralism’. As the book’s title suggests, it’s at the level of narrative and analysis where the crux of this distinction lies.

Warring Fictions focuses on three myths, which sustain left populism but are not found on the pluralist left: the Dark Knight, the Puppet Master and the Golden Era.

As the body of evidence in the book demonstrates, these frames are most common on what is usually described as the ‘far’ left. For example, Corbynism – with its tales of self-serving Blairites and ‘neoliberal’ decline – is premised upon all three. Indeed, left populist movements across the world are distinguished less by policy than by a belief in these types of narrative.

(Right populists, like the Brexit Party and Donald Trump, also thrive on narratives of conflict, conspiracy and nostalgia, it should be said. Warring Fictions’ argument is that the left must not ape this).

The case made in Warring Fictions is that the Dark Knight, the Puppet Master and the Golden Era are dangerous to democracy and run counter to progressive aims. Populism and socialism are incompatible, and parties which rely on populist folklore will never be equipped to govern.

The three myths inadvertently lead progressive parties like Labour down extremist and divisive cul-de-sacs. They cloud our judgement and supply us with excuses for failure. They encourage us to focus on phantom menaces, not real issues.

Anti-Semitism, for instance, stems from a convergence of Dark Knight attitudes to the Middle East and a Puppet Master attraction to conspiracy theories. Likewise, Corbyn’s Lexiteer instincts fuse a Puppet Master suspicion of global ‘elites’ with a Golden Era memory of socialism-in-one-country.

The bulk of Warring Fictions therefore focuses on explaining and debunking the three myths. With each one there is a hypothesis about why it’s compelling. And there’s an attempt to unpack why it’s false, and what a truer reality might look like.

For instance, the Puppet Master section of Warring Fictions explores how accusations about the ‘MSM’ (mainstream media) cloud Labour’s ability to get its message across. But it also tries to understand why the ‘MSM’ analysis is seductive.

It looks at how we can properly grasp the dynamic between politics and the media, rather than relying on Puppet Master assumptions.

Ultimately, Warring Fictions lays down a gauntlet to the present Labour left, asking what progressive values look like once we remove the Dark Knight, the Puppet Master and the Golden Era. Can you be a socialist without buying into these tropes?

But the book also challenges those on Labour’s ‘moderate’ wing, proposing a new reading of what the party’s present conflict is about. It asks that we focus our critique where the deeper issue lies: on Corbyn’s populism rather than his leftism.

The arguments in Warring Fictions engage with case studies from the last four years. These range from Labour policies on student fees or intervention in Syria, to aspects of the Corbynite left’s social media rhetoric, such as the ‘Overton Window’ idea.

Alongside this runs a more fundamental argument, about what the best direction for socialism looks like, once you strip away the three myths. The text advocates a John Rawls idea of ‘objective fairness’ (equal rights, equal opportunities, fair outcomes) as the castle on the hill for progressive thinking.

It touches, in the process, on the writing of academics including Thomas Piketty, Anthony Crossland, Steven Pinker, Jonathan Haidt and Amartya Sen. And it looks at the existential trade-offs between economic collectivism and socially liberal internationalism, which have been brought into focus in recent decades.

Towards the end of Warring Fictions, Chris Clarke discussed his own experiences growing up in a family in the political spotlight. He acknowledges the difficulty of abandoning the myths – and the risk that doing so leads to a technocratic form of politics. But the book’s ultimate argument remains a robust defence of the need for objectivity, rationality and pluralism on the left.

This is highly relevant as the UK enters the third decade of the 21st Century, and as Labour looks to the future after the 2019 election.

Authors
Chris Clarke
Author
Chris Clarke is a communications expert in local government. He specialises in cohesion, and in building bridges between values groups.